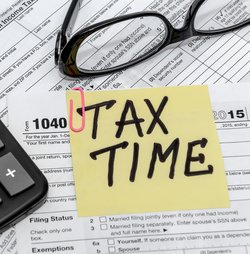 tax form with callculator and glasses

Approximately 239 million tax returns are filed each year, and many would agree that the current tax system is outdated.

As Republicans aim to pass the first tax system overhaul in three decades, you can expect some tax changes for your 2018 tax return.

In this article, you’ll learn what you can expect based on what we know about the changes so far. Ready? Let’s get started.

However, these deductions could be quite different if the GOP’s tax reform bill ends up passing in time for the 2018 tax year. This tax framework nearly doubles the current deductions, calling for a $12,000 deduction for single filers and $24,000 for married couples.

Recently, the IRS released the 2018 tax brackets. These have the same marginal tax rates, however, the income thresholds are slightly higher. The tax rates are currently:

Under the Republican tax plan, these would be consolidated into three brackets, which would be 12%, 25%, and 25%.

The tax changes are good news if you’re preparing for retirement. In 2018, savers who are contributing to their individual retirement accounts will be given higher income ranges after any adjustments for cost of living. For single taxpayers, the 2018 limit will be between $63,000 and $73,000.

This will work a little differently for married couples. This is because the phase-out range depends on whether you’re covered by a workplace retirement plan.

The AMT is designed to ensure that people earning a higher income are paying their fair share- even if they’re benefiting from lots of tax credits and deductions.

The GOP is opposed to the alternative minimum tax as they say it makes the tax system more complex. Critics on both sides say that it also impacts more people in middle-income tax brackets than it was intended to. Under the Republican tax reform, the AMT would be gone altogether.

Ready for These Tax Changes?

While we now know what the planned tax changes are for 2018, many of these won’t matter if the GOP manages to pass a tax reform bill. For the time being, assume that these changes will be implemented, and be prepared to make adjustments if tax reform does end up passing before the next tax year.

Need tax advice? Get in touch today and learn how we can help.